It’s a place Aotearoa’s writers meet with like minds, and a place many grow their first novels, poetry collections, scripts, or plays.

“We’re a school, but I don’t think we have a uniform,” remarks novelist and current IIML Director Professor Damien Wilkins, who took over from founding director Emeritus Professor Bill Manhire in 2013.

The IIML celebrates its 21st birthday this year, as the University celebrates 125 years since it was founded.

The University was first in New Zealand to offer a creative writing course, thanks to the “charismatic bibliographer” Professor Don Mackenzie, who added an undergraduate paper to recognise students’ creative writing in 1975. It grew to become an original composition paper, run first by assessment, before founder Emeritus Professor Bill Manhire introduced workshops—with writing exercises.

“Soon I was asking people to make large cardboard dice, write words on them, and throw short poems,” the poet and essayist says in a speech published in Text Journal in 2001.

By 1996, original composition was attracting over 150 applications for 12 spaces each year, and had graduated such luminaries as Emily Perkins, Elizabeth Knox, Catherine Chidgey, Alison Wong, and many more. In 2000, they had the good fortune to attract the attention—and money—of United States casino executive Glenn Schaeffer. Thanks to his funding, the IIML was founded in March 2001.

Novelist Anna Smaill, a member of the first group to do her Master’s in the new Institute, says, “Its genesis already felt like lore: the Institute had been built from the largesse of a Las Vegas magnate. It was his money that helped renovate the villa… This was the future we were moving towards: writing tinged with the glamour of fine fortune.”

Damien has taught writing at the University since 1995, and began teaching the Master’s degree full-time in 2005. He says, “In essence, I am paid to read and write—which is what I would be doing anyway if I didn’t have the job, so it’s a good fit for my interests!

Although they sit within the University, Damien says they’ve been able to create and hone a tailor-made programme for writers. “Small group teaching continues to be central, we take our work very seriously, and we are devoted to our students.

“And we are very closely connected to the local and national writing community, whether through our ties with Te Herenga Waka University Press or Ōrongohau | Best New Zealand Poems, or the National Schools Poetry Award. We face both ways—inwards towards our students, and outwards towards Aotearoa’s unique literary culture.”

Acting Dean of the Faculty of Humanities and Social Sciences Professor Simon Mackenzie says, “That such a rare gem as the IIML exists within the Faculty of Humanities and Social Sciences, and continues to be one of our flagship programmes, is a real source of academic satisfaction for me. Damien and his team are so integral to the creative writing scene in Aotearoa and the reputation of the IIML is, deservedly, pretty legendary.”

At the IIML, you can find a range of undergraduate workshops, alongside a Master of Arts in Creative Writing with streams in Writing for the Page (poetry, fiction, creative nonfiction) and Scriptwriting (stage, screen, radio), as well as the PhD Creative Writing programme.

Poet Tayi Tibble (Ngāti Porou, Te Whānau-ā-Apanui), who studied the Master’s (Writing for the Page) programme in 2017, says, “My writing developed so much during the course. I learned quickly to listen to criticism with humility, to trust the intelligence and generosity of my classmates, and to have faith in the work and my skill as a writer.”

Since its early days, the programme has had an open application policy—you don’t require a degree in English Literature to participate.

In her MA cohort in 2018, creative non-fiction writer and software developer Rose Lu says she found “scientists, jocks, artists, principals, musicians, and of course writers”. “There were so many rich conversations about the nature of life and literature, many that eventually made it on the page, and some best left in the workshop room.”

Literary magazines that have arisen thanks in part to connections formed at the IIML include Sweet Mammalian, Starling, and Stasis. Graduates have also founded bookshops—Good Books—and publishing houses, like We are Babies Press.

“What happens, which is so important, is writers find each other through the IIML workshops and sustain long-term relationships from which new literary magazines, new publishing ventures, and collaborations of all kinds emerge,” says Damien.

Another way in which the IIML supports the industry is through provision of writers residencies, giving writers the most precious form of support: the opportunity to give up other paid work, and write.

The first Writer in Residence was Joe Musaphia, in 1979, and other writers who have received this award over the years include Jack Lasenby (1993), Charlotte Randall (2001), Paula Boock (2009), and Victor Rodger (2017)—who now teaches a Māori and Pasifika workshop. The current resident is essayist Megan Dunn.

Reflecting on the IIML’s Te Tiriti commitments into the future, Damien says, “More and more we’re looking for ways to give the power to the writers and to enable their initiatives to be realised, rather than for our structures to always lead things. That’s the big decolonising conversation creative writing needs to have.”

Photo (top of page): Emeritus Professor Bill Manhire and then Prime Minister Helen Clark at the launch of the IIML in 2001.

Photo (below): A handwritten birthday note from Jenny Nimon, who is part of the 2022 MA cohort. 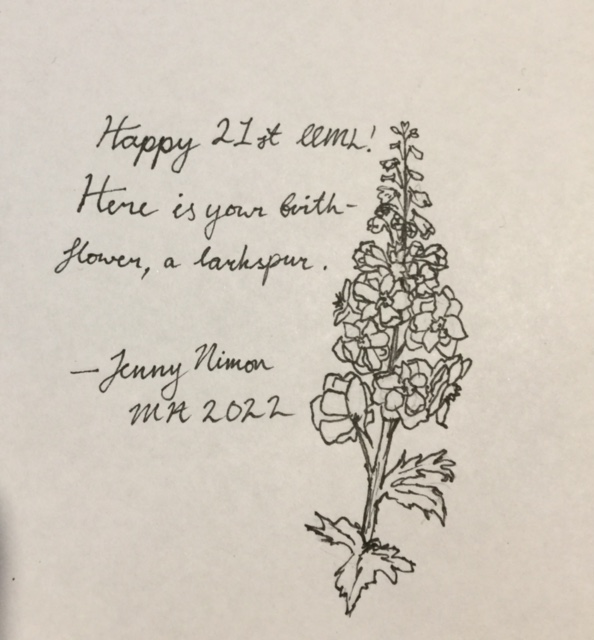