A scholarship has been established in honour of Sir Lloyd Geering ONZ, GNZM, CBE, founding professor of the Religious Studies programme at Te Herenga Waka—Victoria University of Wellington.

Sir Lloyd, who celebrated his 104th birthday in February 2022, is one of Aotearoa New Zealand’s most influential and progressive thinkers and commentators on religion. A highly decorated academic, he remains the only New Zealander to be tried for heresy.

The Religious Studies programme, which celebrated 50 years in 2021, has become one of the largest and most influential of its kind in Australasia, with a reputation for outstanding teaching and cutting-edge research. Programme director Dr Geoff Troughton notes that while much has changed, the tradition Sir Lloyd established of lively, broad-ranging teaching, study, and debate about religion continues to flourish.

The University commissioned a portrait to commemorate Sir Lloyd’s role as Professor of Religious Studies, a position he held from 1971 until his retirement in 1984 when he was appointed Professor Emeritus. 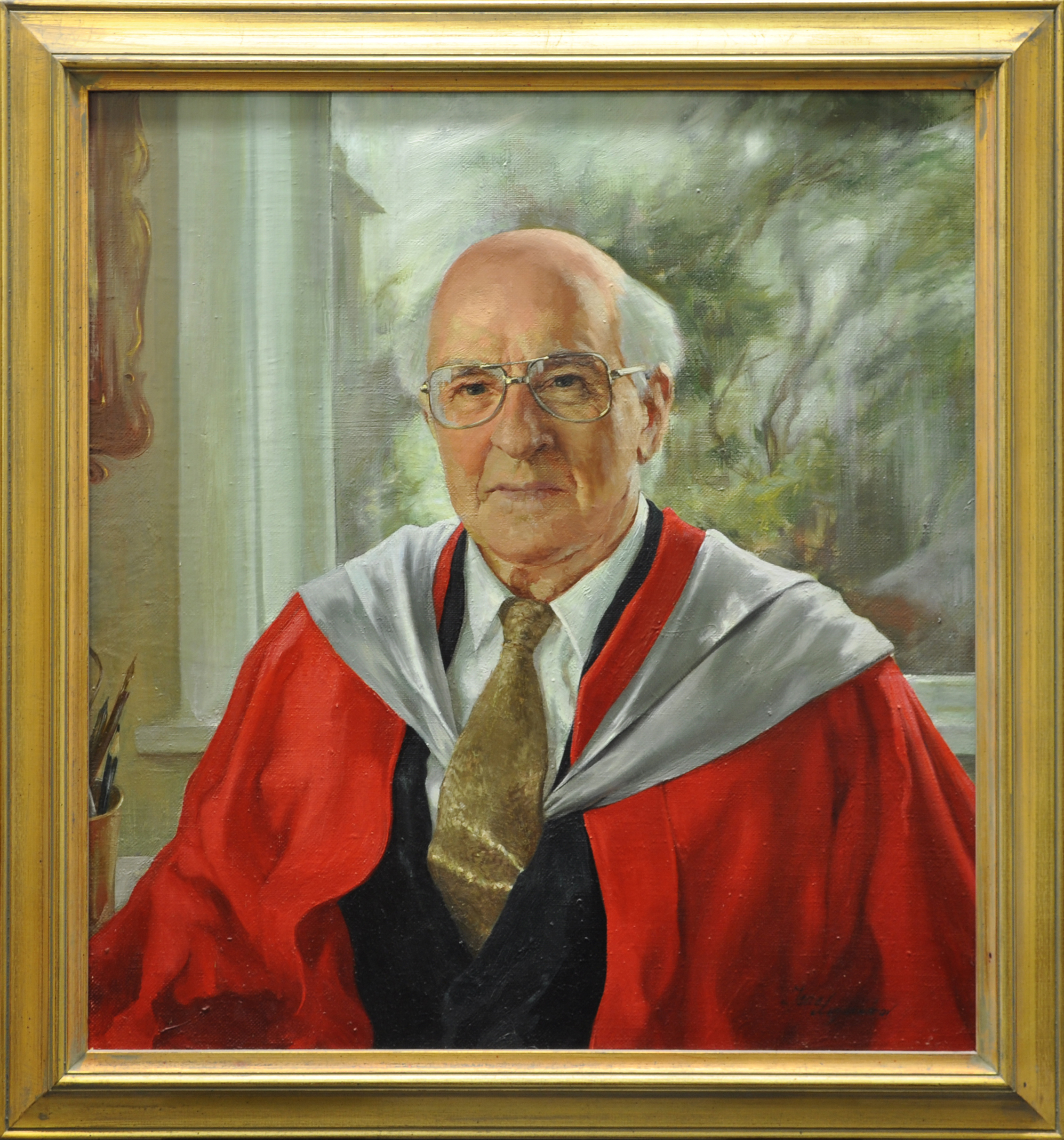 Making a significant contribution to our history

During his time at the University, and ever since, Sir Lloyd has been at the centre of thinking about the transformation of religions and society in the modern era, spirituality, the future of religion, and other matters of human concern.

He has donated a large archive of his papers to the University to be held in the Tapuaka—Heritage and Archive collection in the library’s J. C. Beaglehole Room. Emeritus Professor Paul Morris describes them as “extensive and important, not only for the intellectual study of religion in New Zealand, but also as part of our social, political, and religious history”.

Growing up on the farm and the Student Christian Movement

Lloyd was born in Rangiora in 1918, at the tail end of World War l. His parents worked in the Kaiapoi woollen mills and on small farms where he grew up without electricity. He had a contented but somewhat solitary childhood and youth as his three older brothers had by then left home.

Lloyd excelled at schoolwork, winning many prizes, and went on to obtain degrees in Mathematics and Old Testament Studies at the University of Otago. It was there that he became involved with the Student Christian Movement, the University’s largest student organisation at the time. Attracted by the sense of fellowship, he found himself attending church multiple times on Sundays as well as teaching Sunday School.

A call to the ministry

Sensing a ‘call’ to the ministry Lloyd entered Knox College as a theological student in 1940. He was exempted from military service in World War ll, which was fortunate as by this time he was a confirmed pacifist. Once ordained as a Presbyterian Minister, Lloyd served in Kurow, Dunedin, and Wellington, and held Chairs of Old Testament Studies at theological colleges in Brisbane and Dunedin.

Daring to ask the big questions

Lloyd’s intellectual curiosity led him to ask big questions—one of his earliest sermons was entitled “What is God like?” In 1966 he published an article called The Resurrection of Jesus where he explained that the resurrection and ascension could no longer be taken as fact. A lecture and further article denying the immortality of the soul led the Presbyterian General Assembly in 1967 to charge him with ‘doctrinal error and disturbing the peace and unity of the church’.

Lloyd famously stated during the subsequent ‘heresy’ trial, “I would like to suggest that what my accusers have been pleased to call the peace of the church is more properly called the sleepiness of the church and we should be thankful to God that it has been disturbed.”

The trial, which was televised, provoked a great deal of public controversy. A letter found in Sir Lloyd’s papers purporting to be from Satan thanks him for his work in promoting doubt among the people of New Zealand.

While it would be unfair for Sir Lloyd’s lifetime accomplishments to be defined by the trial, it created “a great dividing line” in his life and for religious debate in New Zealand. Sir Lloyd maintains that he wasn’t saying anything that hadn’t already been discussed by other theologians overseas and pointed out that his accusers “hadn’t kept up with their reading!”

While he enjoyed the theological debate at first, he felt that the wrong issues were being discussed. The church ultimately withdrew the charges.

Sir Lloyd’s disillusionment with the church’s response led him to recognise that the church was as human as any other society and to pursue his distinguished academic career. To the surprise of some, Lloyd remains a lifelong churchgoer, valuing the sense of community to be found there. He became involved with St Andrew’s on the Terrace, a progressive church where he was an honorary assistant and lecturer.

A lifetime of reading and writing

Sir Lloyd is widely known as a writer, radio broadcaster, and television commentator even after his retirement in 1984. He wrote regular columns in the Auckland Star and the New Zealand Listener and was an entertaining and thought-provoking speaker.

He is a prolific reader and the author of over twenty books, the most popular of which is Christianity without God. Other titles include God in the New World, Tomorrow’s God, Wrestling With God: the Story of My Life, Portholes to the Past, and From the Big Bang to God. The Andrew’s Trust for the Study of Religion and Society also published a series of his short monographs. He has not been afraid to modify his views through continuous study. He discovered that the act of writing books changed his thinking as much as reading the books of others.

On a different topic, late wife Shirley, Lady Geering encouraged Lloyd to record his cycling adventures as a young man in the book On me bike: Cycling around New Zealand 80 years ago.

The defining issue of our times

Sir Lloyd has always been interested in environmental issues and is a member of the Green party. He feels that since the facts on climate change are now irrefutable, green issues have become the great religious issues of the day. In 2021 he joined the Intergenerational Climate Ambassadors established in 2020 by scientist Jim Salinger and Kapiti Coast district councillor Sophie Handford.

Sir Lloyd has argued that communal celebrations and rituals are important but should be based on the natural world, so he is pleased to see Matariki now being embraced as a public holiday. He is a confirmed optimist and describes many positive changes over his lifetime. He does admit to occasional nostalgia for simpler times when people felt secure and looked forward to the exciting developments they felt scientific discoveries would bring.

On considering his long life, Sir Lloyd comments that he has gone one better than Sir Edmund Hilary who famously commented “I’ve had two wonderful wives”. Sir Lloyd has had “three wonderful wives”. He has two children with first wife Nancy, and one with second wife Elaine to whom he was married for 50 years. He established a postgraduate scholarship in English Literature in her memory as she was studying for a PhD prior to her death in 2001. Third wife Shirley, Lady Geering died in 2021.

Emeritus Professor Paul Morris points out that although Sir Lloyd has not actually been a minister since 1971, in a very real sense he has ministered to New Zealanders through his pamphlets, reviews, articles, lectures, interviews, and his many books.

We are delighted to honour Sir Lloyd’s contribution to the study of religion, and his legacy of prescient and progressive thinking through the Sir Lloyd Geering Scholarship in Religion. This scholarship will support a new generation of postgraduate students to tackle the critical issues of their times with the fresh thinking and expansive imagination that Sir Lloyd exemplifies.

The first recipient of the scholarship is Arama Tairea who is completing a thesis on the religious experiences of Cook Island people in New Zealand. 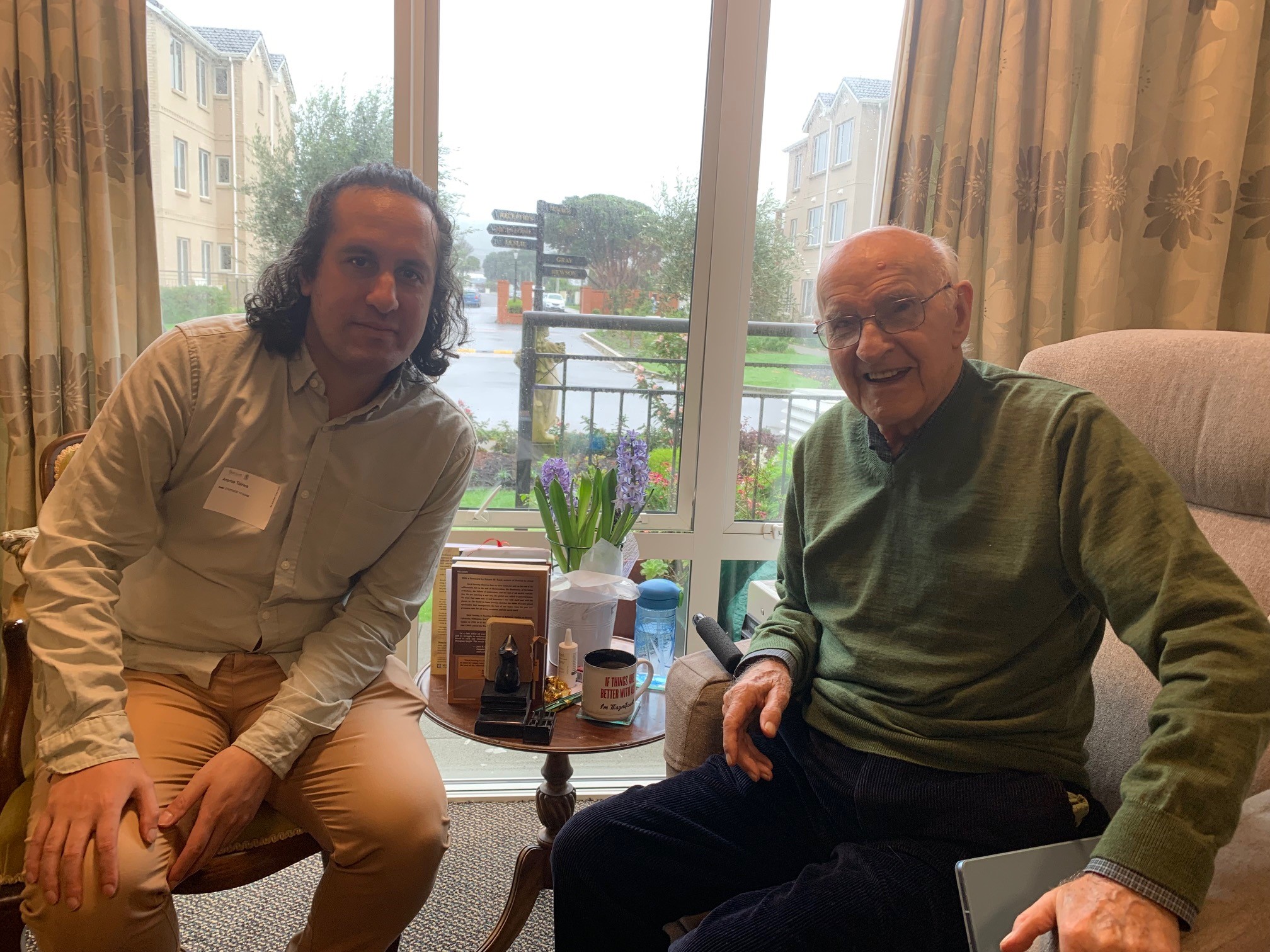 Donate to the Sir Lloyd Geering Scholarship in Religion.