The Sarah Anne Rhodes Research Scholarship is offered every year to women graduates of any university who want to carry out postgraduate study at Te Herenga Waka—Victoria University of Wellington. It was established through a gift in the will of Sarah Anne Rhodes who died in 1914.

Because this fund was endowed, it has grown in value over the years and in 2022 supported three talented postgraduate students. Feryl Badiani is collecting research data in three different languages in three parts of India for her PhD research in Psychology. Following this she aspires to an academic career. Hiromi Beran is completing a Master’s degree in marine biology and hopes that her study of fish using deep reefs as heat refuges will help with real world conservation and fisheries management. Olva Albot is grateful for the opportunity to complete her PhD on the impacts of sea level rise on Aotearoa New Zealand’s little-understood coastal wetlands.

Sarah Anne would probably be amazed at the opportunities she has created for these young women to carry out scientific research in 2022, as the expectations for women’s participation in scientific research have evolved significantly over the last century.

In 1859 Sarah Anne Moorhouse came to New Zealand aged 22 with her brother and two sisters. She lived under the care of another brother until 1869 when she married William Barnard Rhodes, 30 years her senior.

William Rhodes had lived a colourful life. He left England as a teenager to go to sea and by the age of 24 had command and part ownership of a vessel. He sailed to South America, Africa, and India before selling the boat in Australia and purchasing land and cattle. In 1839 he arrived in New Zealand hoping to take advantage of the new colony by securing ‘title’ over vast amounts of land. He established trading stations and illegal cattle runs and although some of his claims were later disallowed, he was able to acquire land from other settlers.

Escorting the first settler ship Aurora when it arrived in Port Nicholson in January 1840, he set up a successful import and exporting business, W.B. Rhodes and Company, which was based in Te Aro. By 1853 he was being referred to as “the millionaire of Wellington”. William helped establish the Wellington Chamber of Commere and became very involved in local politics.

According to Te Ara, Dictionary of New Zealand Biography, William Rhodes was “a hard man not over-concerned with social niceties…It has been suggested that in an age of grasping opportunism Rhodes was one of the most successful of graspers. At his death he was described as ‘one of the richest men in the country’.”

William Rhodes’ first wife was Sarah King. They had no children but raised his daughter Mary Ann from an unknown Māori mother. Sarah Anne had no children either but mentioned in her will her “beloved step-daughter Mary Ann” now married to Sarah Anne’s brother Edward Moorhouse and living in England. She left her a sum of money along with her “Brussels, Honiton, Spanish and Chantilly lace” and “such of my strictly personal chattels as she may desire to have.”

In the 1860s William had built a grand house known as ‘The Grange’ on land he owned on Wadestown hill where Sarah Anne continued to live for many years after William’s death in 1878. 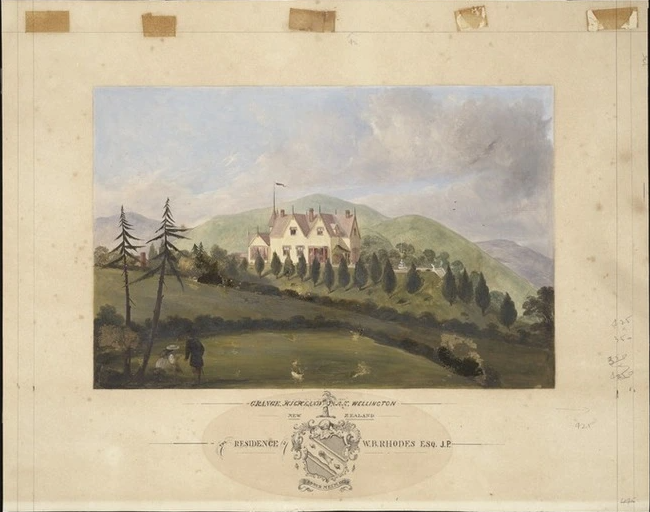 She was prominent in charity work in Wellington and gave generously of her time and money to the city and the church. She was President of the District Nursing Guild of St John, Wellington and was made a Lady of the Order of St John of Jerusalem—the first New Zealand woman to be appointed into an Order of Knighthood.

Sarah donated many items to the city of Wellington including its mayoral chain, the hour bell of the Post Office tower clock, and an ornamental brass lectern topped by an eagle at Old St Paul’s church. 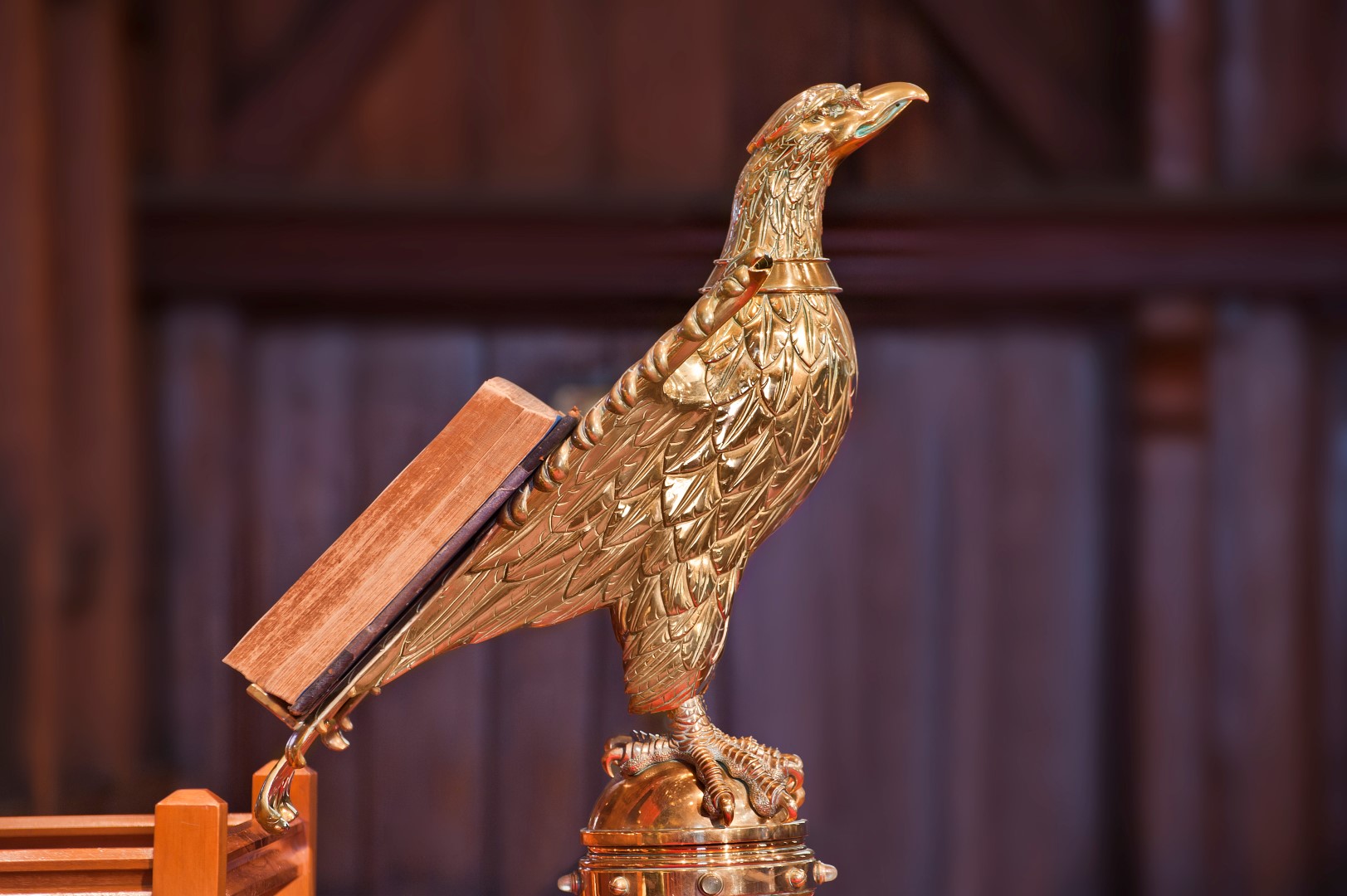 Sarah Rhodes died in 1914 aged 77 years and is buried at Bolton Street Cemetery. She left money from her substantial estate to family members as well as the Wellington Boy’s Institute, YMCA, St John’s Ambulance and Mother Mary Joseph Aubert. She also left £10,000 to ‘The Victoria University Wellington’ to be applied “for the education of women as my trustees in their discretion shall think fit.” Interestingly this was not the correct name as it was Victoria University College at the time, but the lawyers decided this must be the institution she intended.

The trustees saw fit to use it for “the teaching or promoting the knowledge of Home or Domestic Science among the women of New Zealand at or in connection or association with the said College and its activities.”

One of the trustees was her nephew Colonel John Studholme, an eager campaigner for Home Science who was largely responsible for setting up the domestic science school at Otago University. This likely led to the final decision for the money to cover scholarships in Home Science, which considerably narrowed the opportunities for women. In some quarters there was some backlash to the higher education of women, with some preferring that they stuck to ‘feminine’ type subjects. Home Science was compulsory for all girls in their first two years of secondary school from 1917 to 1947.

The Victoria College Council was not sure how to use the money and asked the Professorial Board to report. The Board first proposed establishing a hostel for women students at which instruction in domestic science should be given. Then it decided to create a ‘research lectureship’ and although the Board was split along conservative versus non-conservative lines, this proposal was accepted.

J.C. Beaglehole later bemoaned the use of the large Sarah Anne Rhodes bequest for the education of women, which had been “turned over to the instruction of farmer’s wives in diet and dressmaking—which however admirable in itself—had no real connection with the work of a university.”

Some did use the scholarships to undertake scientific research, including Vera Walker (Reader), who studied nutrition in England and never returned to New Zealand. She worked in the field of vitamin metabolism in London and obtained a PhD in 1926. After having a family, she completed a medical degree as part-time work was easier to find in medicine than in scientific research. She had a distinguished medical career until the age of 81, including pioneering study on the role of allergies in migraines and asthma.

In addition to the scholarships, a Sarah Anne Rhodes Fellowship in Home Science was established. From 1932 the ‘Fellow’ was attached to Massey Agricultural College and conducted classes in cookery, dressmaking, and nutrition.

This coincided with the rise of Women’s Institutes. These began in Canada in 1896 and in Great Britain in 1915 with the aim of boosting wartime food production by increasing women’s role in agriculture and horticulture. Anna Elizabeth Jerome Spencer established New Zealand’s first Women’s Institute in Napier in 1921 after seeing a craft exhibition in London. Unlike the United Kingdom, the New Zealand government did not fund the Women’s Institutes, which provided adult education to the rural community to instil “practical knowledge, thrift and self-sufficiency”.

The committee minutes of the Fellowship in Home Science contain reports from the young women holding the Fellowship of their activities and travels under the auspices of the Federation of Women’s Institutes. Classes they taught had such intriguing titles as ‘cushions and curtains’, ‘salads and savouries’, ‘children’s sunsuits’, and ‘loose covers and humpties’.

They also distributed ‘sample boxes’ of their wares. A “second-hand Morris car” was purchased for the use of the recipients, which at one point was “damaged by a grader (paid for by offender)”. This was later replaced by a “Chevrolet car” obtaining 20 miles per gallon which the women found “quite satisfactory”. Not surprisingly the women often requested to keep the use of the vehicle during the summer holidays.

In 1939 the travelling visits were abandoned as the “present difficulty of securing labour in the country renders it almost impossible for girls to leave home during the busy period in November.”

In 1936 the enterprising Miss Johnson had applied for extra funding from the Carnegie Corporation to do Home Science extension work and visited America, Canada, England, Sweden, Denmark, and Australia. Her request for another overseas trip in 1941 was however turned down.

We are grateful that Sarah Anne Rhodes’ bequest made over one hundred years ago is still supporting women today to study science subjects, which are not just domestic. 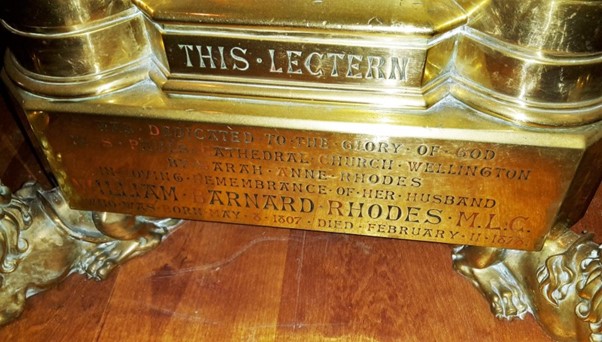 Photo: Base of the brass lectern donated to Old St Pauls by Sarah Anne Rhodes in 1881

Rebecca Nuttall, ‘The Millionaire of Wellington’, Old St Paul’s: A Biography of a Church, 2015, https://osphistory.org/2015/10/05/the-millionaire-of-wellington/