In October, distinguished guests from the realms of law and politics gathered in the Beehive Banquet Hall to honour a great New Zealander—the Right Honourable Sir Geoffrey Palmer was turning 80. A symposium entitled ‘Futures of Democracy, Law and Government’, covered topics that have exercised Sir Geoffrey’s thinking throughout his esteemed career. 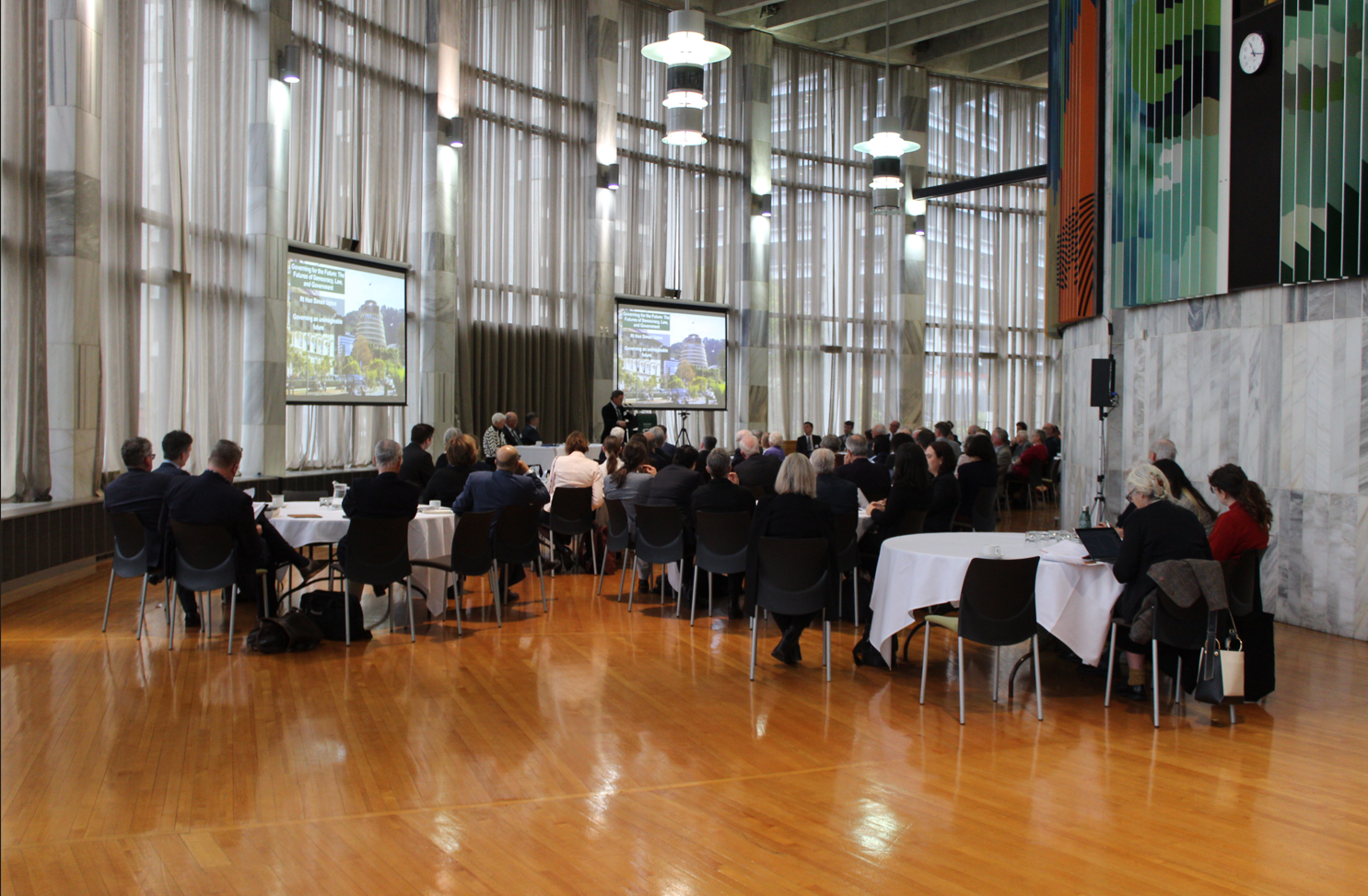 Image: The Futures of Democracy, Law and Government symposium.

A former Prime Minister, Minister of Justice, Attorney-General, Leader of the House, and Minister for the Environment, Sir Geoffrey Palmer has had a huge impact on the consitutional landscape and practice of law in Aotearoa New Zealand today.

Sir Geoffrey claims his main aim was for “a career that has never been boring”. He has been an academic, law practitioner, MP, Minister, law reformer, and participant in international law and diplomacy, and he continues to find domestic and international affairs fascinating. He enjoys robust debate over constitutional law and policy issues that matter.

During his career Sir Geoffrey has been driven by a dissatisfaction with the way things are and a determination to make a difference. In the words of Hon. David Caygill, Sir Geoffrey “knew what he wanted to achieve and knew how to bring about change.” He had many successes, always aided by the intellectual contribution and support of his wife, Margaret.

Sir Geoffrey has accumulated many honours and accolades throughout his career. He holds honorary doctorates from four universities, including Victoria University of Wellington, and is a global affiliated professor at the College of Law, University of Iowa. In 2016 he was elected as an Honorary Master of the Bench of the Middle Temple, an eminent English legal institution founded in the 14th Century, as a distinguished individual who has excelled in his profession.

Deriving inspiration from Plato and Aristotle

Born in Nelson, Sir Geoffrey came to Victoria University College in 1960 to study political science and law. The education he received helped shape the intellectual interests that have remained constant throughout his life. He found the first-year Political Science lectures on Aristotle’s politics and Plato’s republic to be absolutely basic to his understanding as they touched upon almost every issue of governance.

Sir Geoffrey graduated with a Bachelor of Arts and Bachelor of Laws and was admitted as a solicitor of the Supreme Court in 1965 and as a barrister in 1966. After working as a solicitor for a Wellington law firm, he took up a British Commonwealth Fellowship to the University of Chicago where he graduated Doctor of Law cum laude in 1967. After teaching political science at Victoria University of Wellington he moved to the States to work as a law professor at the universities of Iowa and Virginia before returning to Wellington as a professor of English and New Zealand law in 1974. On leaving politics in 1990, Sir Geoffrey returned to academia as a law professor at Victoria University of Wellington and the University of Iowa. In 1994 he established Chen Palmer, New Zealand’s first public law firm with fellow lecturer Mai Chen.

Te Herenga Waka—Victoria University of Wellington has been Sir Geoffrey’s intellectual home, and we have been fortunate to benefit from his contributions as a student, lecturer, donor, and Distinguished Fellow. In turn, he has appreciated the University’s position in the centre of the government precinct, which gives researchers the opportunity to find out how decisions are made and talk to the people making them.

Sir Geoffrey’s son Matthew Palmer is a former Pro Vice-Chancellor, Dean of Law, and Director of the New Zealand Centre for Public Law at Victoria University of Wellington, and is now a High Court judge. Daughter Rebekah is a graduate of the University and grand-daughters Helena and Gwen are current students. Matthew notes that Sir Geoffrey enjoyed “simultaneously terrifying and endearing himself to generations of students.”

Raphael Hilbron, former student and Foundation Trustee recalls “though I didn’t realise it at the time, I was taught by some of the finest creative and legal minds in the country. One of my vivid memories is of Sir Geoffrey Palmer admonishing students for failing to read the Dominion newspaper before class. He stressed the importance of being informed citizens if we were to become useful lawyers.”

While studying at the University of Chicago in 1967, Sir Geoffrey encountered Sir Owen Woodhouse who was there discussing his thinking for what became the Woodhouse Report into accident compensation. Sir Owen became a close friend and mentor for Sir Geoffrey, who shared his vision of a fair no-fault compensation system. To honour Sir Owen’s legacy, a fund has been established to support the Sir Owen Woodhouse Memorial Fellowship including regular lectures and seminars.

Sir Geoffrey gave the second Owen Woodhouse Memorial Lecture in 2018 and called for a bold and visionary overhaul of New Zealand’s accident compensation system. While the present system has improved outcomes for accident victims there is “unfinished business”. He says it remains incomplete and unfair, as it doesn’t cover those incapacitated by illness and is not what the designers of the system intended—a simple process not requiring lawyers.

A chance to get things done

Sir Geoffrey entered politics in 1979 when he was elected to parliament in a by-election as the Labour MP for Christchurch Central. He was vigorously attacked by then Prime Minister Sir Robert Muldoon for being a professor. Fortunately not long after he joined parliament, events occured that were tailor-made to his interests.

In 1984 when Labour won the election, he became Deputy Prime Minister. He also held the offices of Attorney-General, Minister of Justice, Leader of the House, Prime Minister, and Minister for the Environment from 1987 to 1990, the latter an area of personal interest.

As Colin James, political journalist and Senior Associate of the Institute for Governance and Policy Studies pointed out, “Geoffrey was not a politician’s politician. He was there to do.” As Minister of Justice, Sir Geoffrey was responsible for considerable reforms of the country’s legal and constitutional framework, such as the creation of the Constitution Act 1986, The New Zealand Bill of Rights, the Law Commission Act, and the State Sector Act.

He set up a Royal Commission to investigate the electoral system and propose modifications or alternatives. It reported back in 1986 recommending the mixed-member proportional representational system (MMP)—a reform opposed at the time by both the National and Labour parties. Following the referendum, the MMP system was adopted in 1993. 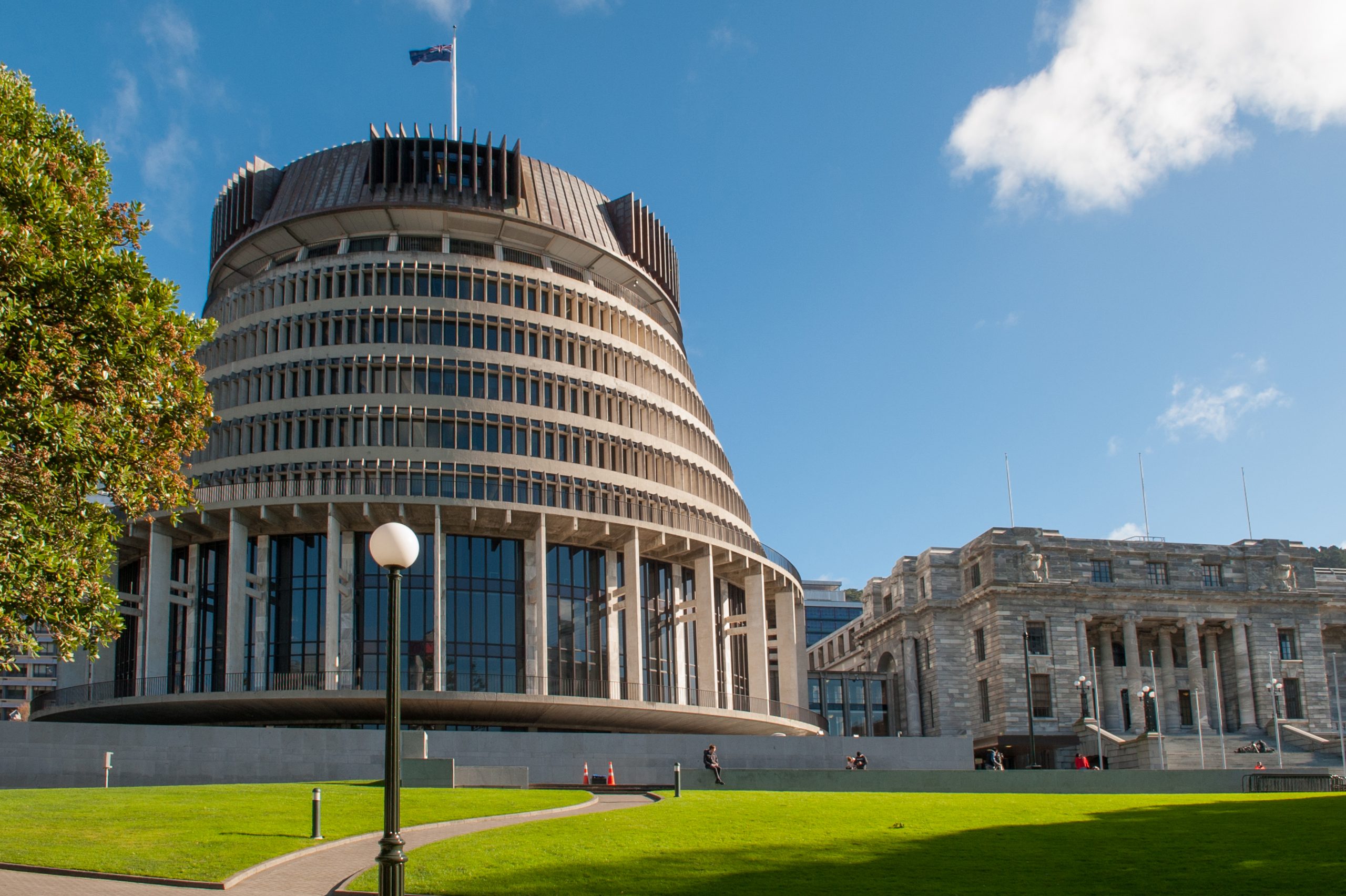 Image: The Beehive in Wellington.

Reflections on his time in parliament

In parliament Sir Geoffrey discovered how hard MPs work. He feels that they deserve New Zealanders’ thanks and respect rather than derision and abuse, believing it to be a difficult lifestyle with high pressure and frequent absences from home, which have unfortunate effects on family life. He found that working with parliamentary colleagues required patience, tact, and empathy—and very few people have all three. The late Sir Michael Cullen remarked in his recent memoir that “Geoffrey in practice was not always the same as Geoffrey in theory.”

Sir Geoffrey notes that no cabinet can be successful without an excellent public service where much of the talent resides, and that their analysis should be more widely sought.

Sir Geoffrey had never coveted the top job. His highest ambition was to be Attorney-General, a ‘working part’ of the constitution. Being Deputy Prime Minister to David Lange had shown him that too much valuable time could be spent appearing in minor public engagements.

He had discovered how a small matter can develop into a huge political issue when as an MP on talkback radio he mentioned the thousands of unregistered dogs in Christchurch. This ignited a huge debate between dog lovers and dog haters, which he says seemed to have much greater importance to listeners than GST.

He served as president of the Law Commission from 2005 to 2010, a government-funded organisation that reviewed areas of laws and then made recommendations for changes to parliament. During his tenure, he persuaded the Government to engage in a programme of reviewing the old Law Commission reports, which resulted in a number of new enactments.

A champion for the environment

Sir Geoffrey has taken a particular interest in environmental law. He was made a member of the Global 500 Roll of Honour by the United Nations Environment Programme and has taught courses on climate change and the law. For eight years he was New Zealand’s Commissioner to the International Whaling Commission. His most-read article is ‘New ways to make international environmental law’ which appeared in the American Journal of International Law in 1992. It suggested that existing methods are too slow and cumbersome, and he has made a speech on the subject to the United Nations, but as yet these suggestions have not been adopted.

A legacy of significant publications

Sir Geoffrey is a prodigious author—he has more than 200 publications in legal periodicals and chapters in books and has authored or co-authored 13 books. He wrote Unbridled Power? in 1978 while he was a visiting fellow at Wolfson College, Oxford. It outlined a programme of constitutional and parliamentary reform to rectify the “elected dictatorship” he felt New Zealand had become and promoted electoral reform that resulted in MMP.

Sir Geoffrey’s support for a written constitution for New Zealand is widely known. He has written two books on this topic with Andrew Butler. A Constitution for Aotearoa New Zealand, published in 2016, outlined the arguments for a written constitution, and drafted out what this could look like. The proposed entrenched Bill of Rights includes an environmental right. After inviting public submissions, they revised the proposals taking public feedback into account and published Towards Democratic Renewal: Ideas for Constitutional Change in New Zealand in 2018.

His latest book Democracy in Aotearoa: A Survival Guide was written with his grand-daughter Gwen Palmer-Steeds, a student of political communication and political science. It aims to solve another problem that Geoffrey sees—“We need to educate the young better than we do about how our system of government works so they can take part in it. Democracy requires strong engagement from its citizens. It can easily slip away otherwise.”

Reflections on governing for the future

True to form, at the symposium Sir Geoffrey analysed the pressing problems that we need to solve for the future. These include the existential problems of climate change, the breakdown of the rules-based international order, and the economic dislocation resulting from COVID-19.

He says “there is something very weird going on in the policy firmament about the world at the moment.”

In his view this is exacerbated by current trends such as the 24-hour news cycle emphasising the trivial and strange, a debilitated media due to the digital revolution, the decline of democratic principles, lowering of standards of political behaviour, and the refusal to follow well-established diplomatic norms.

Closer to home he worries that our central democratic institution won’t cope adequately with the wicked problems of the future and the transformations required. Decision making is a slow process through a multitude of committees, the three-year electoral cycle makes it difficult to plan long-term, and there is little monitoring of existing legislation to see how it is performing.

Sir Geoffrey is actively involved in advocating for change—he presented at Parliament’s Standing Orders Select Committee in November where he discussed threats to democracy and parliamentary scrutiny. He also pushed for a four-year parliamentary term and an increase to the number of MPs.

Te Herenga Waka—Victoria University of Wellington is proud to count Sir Geoffrey as an alumnus and Distinguished Fellow. He has made a significant contribution to Aotearoa New Zealand through his clear explanations of needed reform and his courage and energy in continuing to challenge the status quo and speak truth to power.

“In the end, law reform is a political activity.”
– Sir Geoffrey Palmer