Terence O’Brien was the founding director of the Centre for Strategic Studies at Te Herenga Waka—Victoria University of Wellington, a post he held for nearly eight years until his retirement in 2001. He has written and lectured widely on international and regional relations, security affairs, and New Zealand foreign policy.

Terence served as a diplomat with the New Zealand Ministry of Foreign Affairs and Trade for over 40 years from 1959–2001. His career included early postings to Bangkok, London, and Brussels where he helped negotiate access for New Zealand dairy products to the European Community. He served as High Commissioner to the Cook Islands, Ambassador to the United Nations (UN) and the European Union, a term at the UN in Geneva including the World Trade Organization, and finally to the UN in New York, including a term as President of the UN Security Council.

For Terence’s 80th birthday, his family established a scholarship to honour his longstanding professional commitment to international relations and strategic studies, and help equip students with a career interest in professional diplomacy. It aims to recognise and encourage top Honours and Master’s students in International Relations and Strategic Studies who are studying some aspect of international governance, multilateral diplomacy or cooperation in the political, economic, or security areas.

Professor Capie comments “these are challenging times for a small, open democracy like Aotearoa New Zealand. We need an understanding of how the Indo-Pacific region is changing and what it means for our national interests. Thanks to the O’Brien family’s generosity, the Terence O’Brien scholarship will fund research and support talented students who are the next generation of foreign policy analysts.” 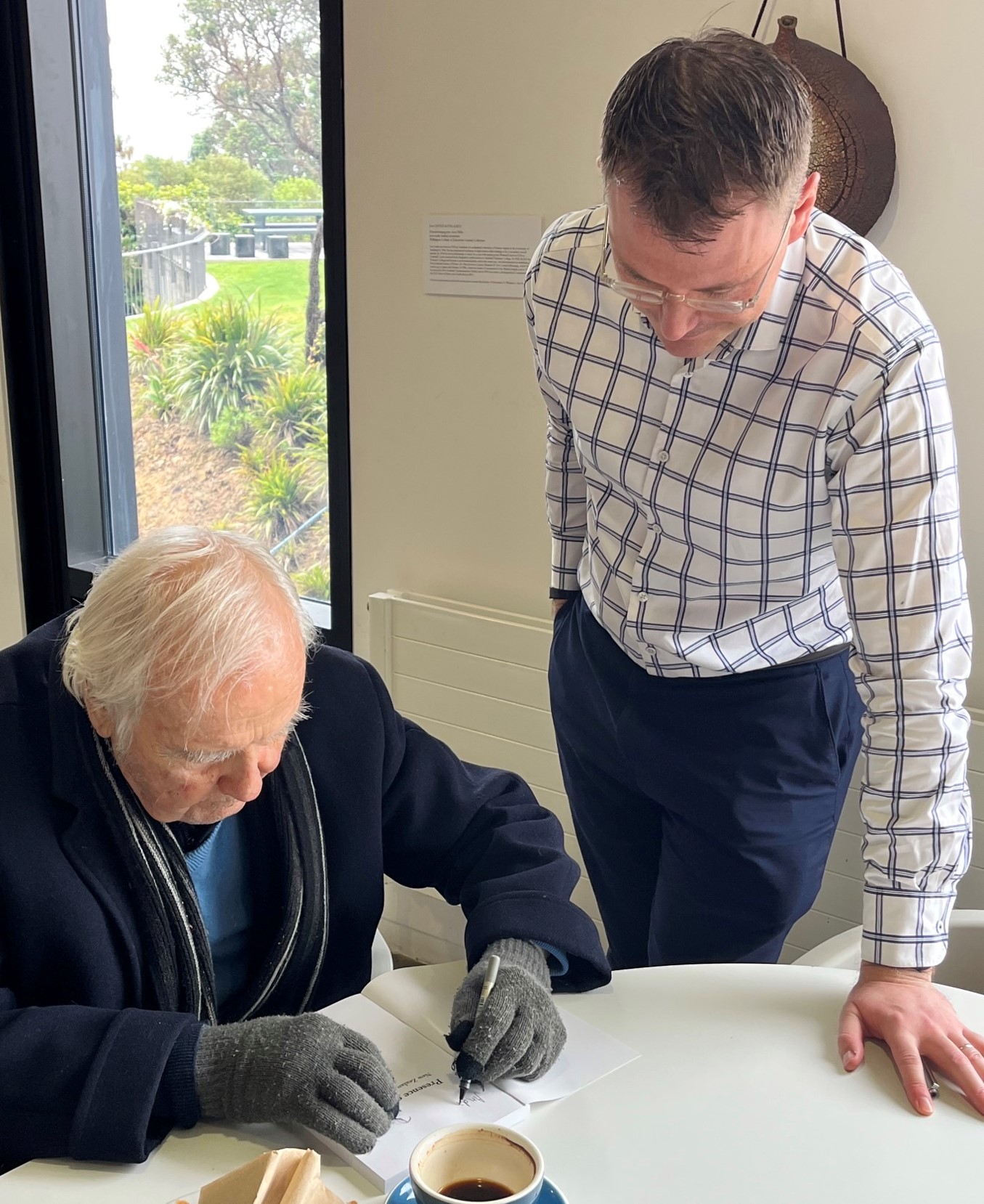 Image: Terence O’Brien signs a copy of his book for Andrew Wilford.

Andrew Wilford was the 2022 recipient of the Terence O’Brien Scholarship in International Relations or Strategic Studies. He enjoyed meeting the scholarship’s namesake with his wife Elizabeth.

“It was delightful to meet with Terence and Elizabeth to express my gratitude for their generous scholarship award. I was struck by how supportive they were of my topic and studies in general. Speaking with someone involved in an official capacity with matters directly related to my thesis was an invaluable experience and tremendously affirming.”

Every recipient of the scholarship receives a copy of Terence’s book Presence of Mind: New Zealand in the World, a selection of writings reflecting on the position of a small, internationally-minded, modern, and multicultural democracy like New Zealand and its place on the international stage. The book stresses the importance of New Zealand taking an independent view on international affairs, reflecting its heritage as a Pacific nation with both Māori and European roots.

Andrew brought his copy to be autographed and commented, “I found it remarkable that Terence addressed many of the key issues New Zealand faces today in this book published over ten years ago. This demonstrates the critical importance of scholars engaging with policy practitioners to understand key foreign policy debates and the role that academic communities can play.”

Andrew’s thesis research seeks to better understand the nature of the China-India bilateral relationship. He notes that Terence O’Brien was a leading figure at the beginning of the political relationship between New Zealand and the People’s Republic of China, accompanying Joe Walding to meet Premier Zhou Enlai and deepening our ties with China.

“To win this scholarship feels like an even greater honour, given this connection and the immense stature and standing that Mr O’Brien has played in matters directly related to my field of research. His distinguished career in Foreign Affairs is a testament to what one can achieve with hard work, education, and opportunity. As the first person in my family to undertake postgraduate study, research has been an enriching experience that has opened my mind to new and exciting possibilities.”

Andrew and Terence plan to stay in touch as his research project progresses. 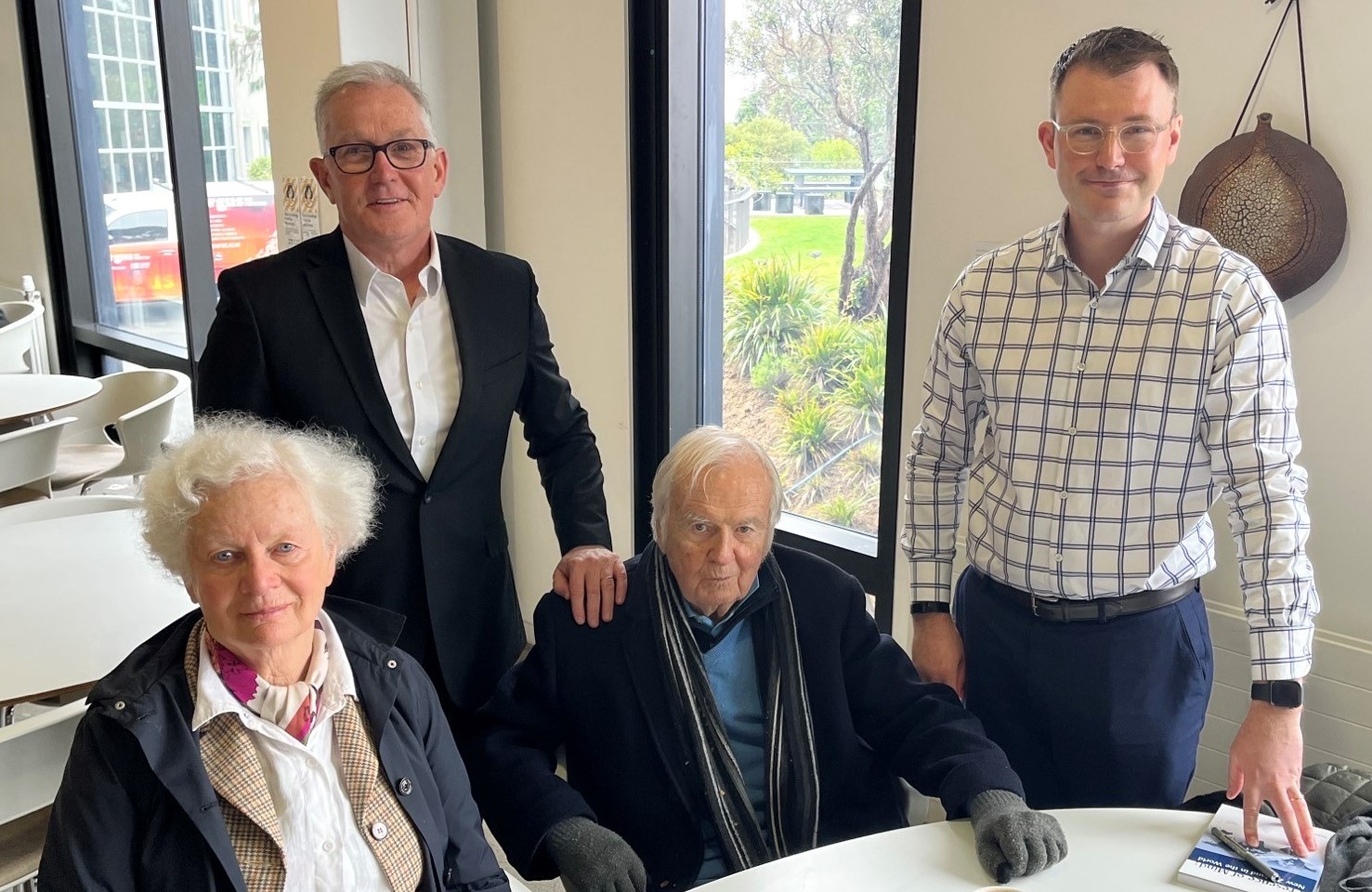