Te Herenga Waka—Victoria University of Wellington’s Kelburn campus focuses on one central anchor: The Hub. A modern ‘agora’, it’s a place to meet, eat, and study—but it wasn’t always so attractive.

Before the Hub was the Quad—lying in-between the Rankine Brown Building, the Maclaurin Building, and the Easterfield Building. More of a home for pigeons than people, it is not a space remembered with fondness.

In March 2007, Salient summarised the “Least Awful Things About the Quad.”

Before even the Quad, there was nothing—a windy space exposing staff and students to the Wellington weather, suitable only for parking up small motorbikes. 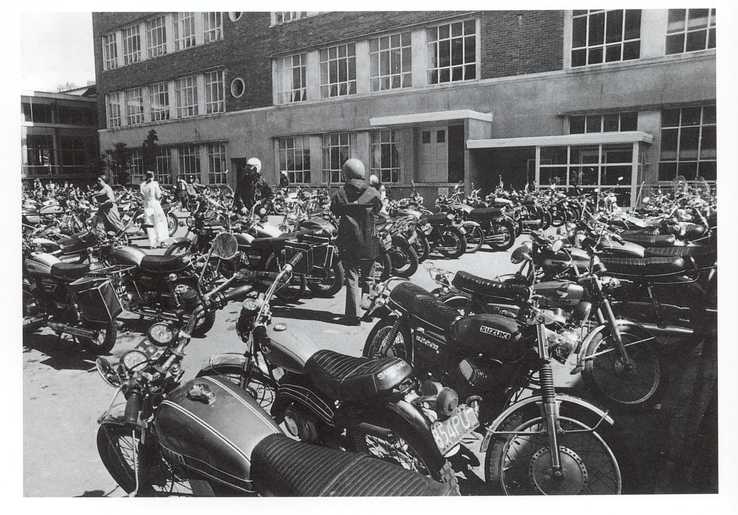 With the University expanding southward as the construction of the Rankine Brown, Cotton, and MacLaurin buildings pulled the campus’ geographic centre south, away from the then “crumbling” Hunter Building, three needs were identified in a 1962 report: shelter from Wellington’s weather, encouragement of social interaction, and shifting walking routes from Kelburn Parade to an arterial route through the campus.

In the same year, the then-President of the Staff Club Les Cleveland called for more: a clearly defined heart to the University with “A bank, post office, telephones, a bookstore, a cafeteria, and a stationery general goods outlet.”

It wasn’t until 1979 though, that landscaping of the Quad began. An outdoor amphitheatre was formed with curved stairs, and the gate for vehicle parking was shut completely—making the space more pedestrian friendly.

Sir Ian Axford was appointed Vice-Chancellor in 1982 and, in response to increasing pressure to take the space further, proposed his infamous ‘Crystal Palace’, a glazed roof canopy enveloping the space. 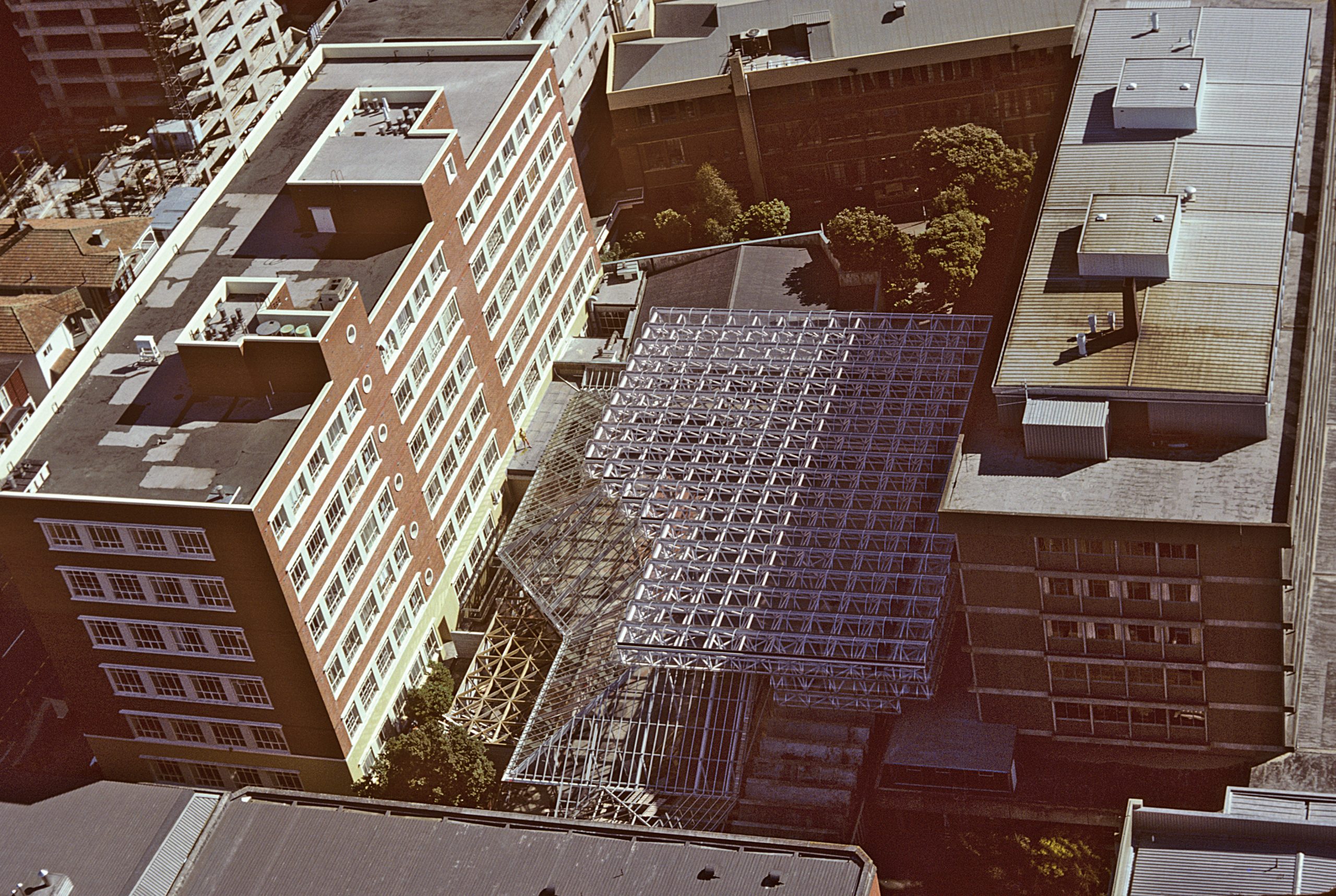 Athfield Architects provided the initial concept, with much testing into wind conditions in the courtyard and the effects the canopy would have. At one point, a device was installed to conduct such tests and, as a letter in a 1986 edition of Salient suggests, it caused some paranoia amongst students.

“Fear not, for that piece of machinery between the Union and Library buildings is not part of Ronnie’s global anti-satellite defence system, or another of the Soviet’s fallen Sputniks.

“You may have heard that the Faculty is putting a roof over the quad, well, the gizmo is to determine wind speeds, thus assisting the bods who are going to put the roof up vis-à-vis supports and braces.”

Construction was completed in 1987 and, despite initial satisfaction from the Library, pleased that its space was no longer used as a social meeting place for students, opinions on the new, covered Quad quickly turned sour.

A staff member at the time says their memories of the space are of “pigeon poop and cigarette butts, and the perennial odour of greasy burgers from the revolting kiosk in the corner that sold deep-fried everything and never changed its cooking oil.” 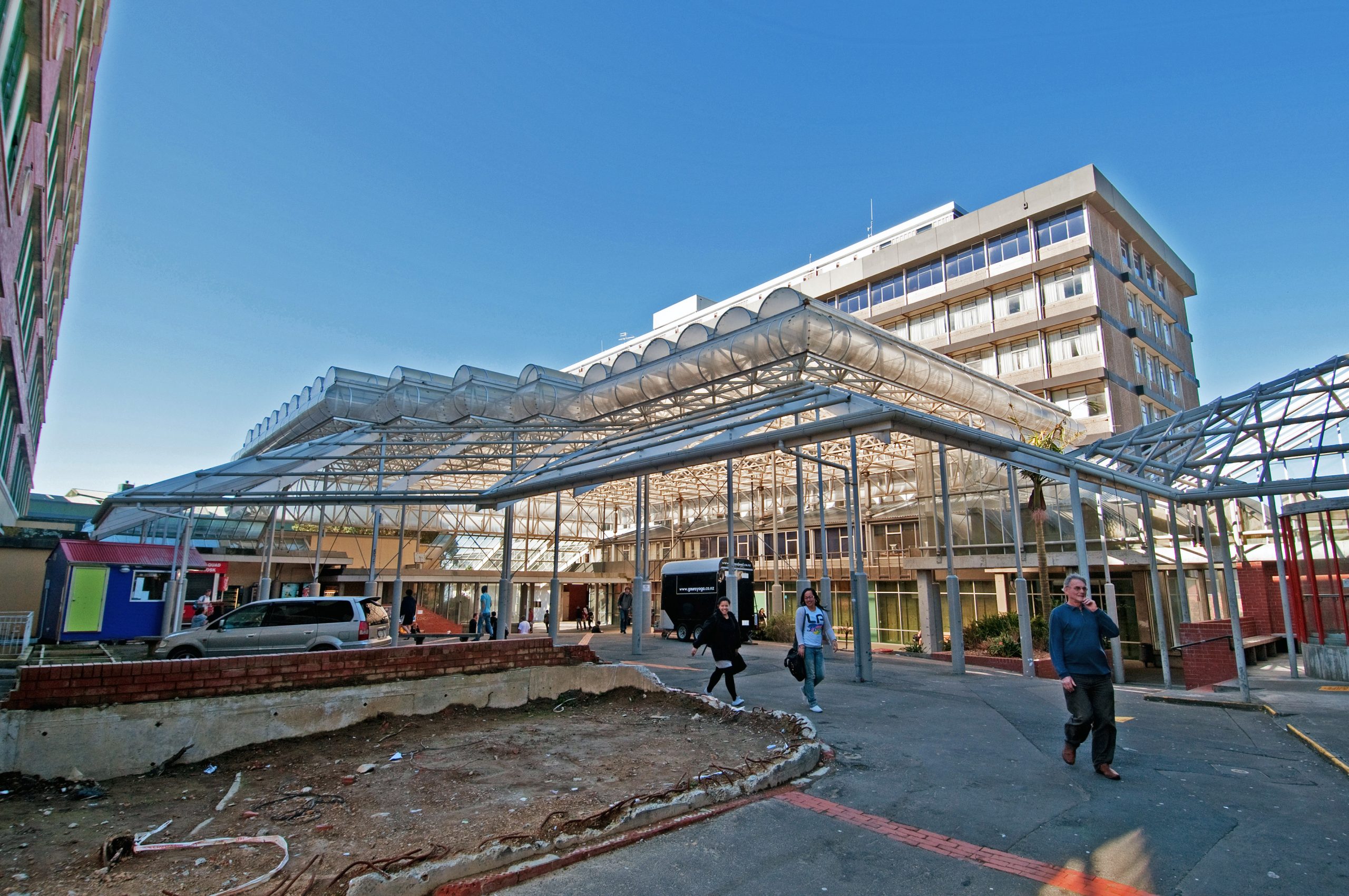 Image: The interior of the Quad.

The Hub is born

In 2006, the University lay down a Framework for the development of the Kelburn campus for a ten-year period. Within the 46-page document was a proposal to develop a heart for the Kelburn campus, one that is “spatially and architecturally memorable, vibrant, active, and attractive.”

Athfield Architects were approached once more and thus, the idea for the Hub was born. 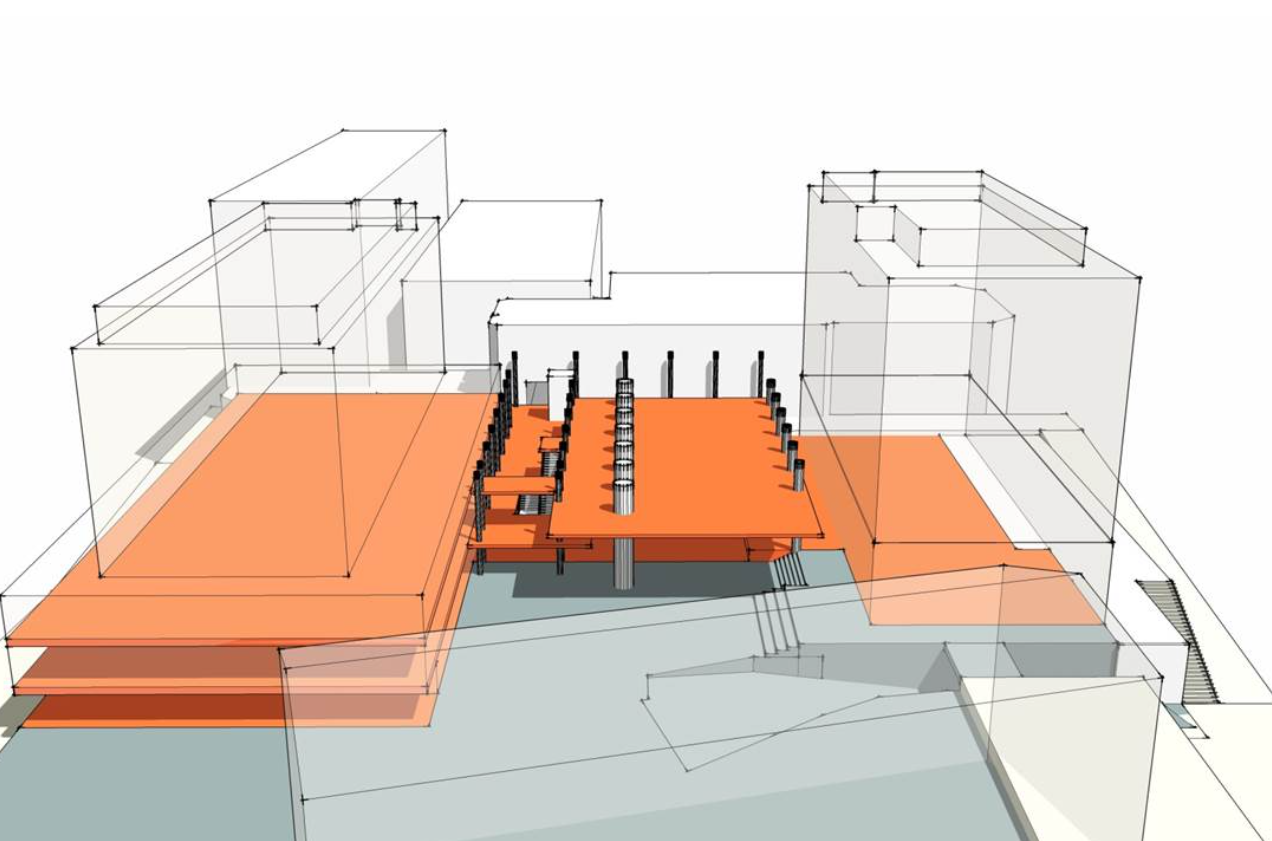 Image: Concept design of the Hub, by Athfield Architects and Architectus.

Amongst many driving principles, it aimed to:

The final concept also provided an upgrade to the Library—Te Pātaka Kōrero, recognising that learning and social functions were “no longer separate”, and shifting the boundaries of the Library itself to create “a greater overlap with learning, social, and recreational functions.”

In 2010, ground was broken and construction on the Hub began. A year into the project, Ivan Burton, a project manager at the University, joined the team.

“It was an incredibly disruptive build. At its most complex, there were 17 active individual construction sites around the whole thing.”

He says the biggest challenge was ensuring students and staff did not accidentally wander into a live construction zone.

“We were interfacing with multiple buildings, multiple walkways, on multiple storeys. So, for anyone going about their normal routine, they suddenly couldn’t go where they normally could.”

The solution was multiple hoardings, lots of signage, and intensive stakeholder engagement.

“Everyone was invested and involved in the process—it was incredibly collaborative. And despite the disruption, most people were willing to grin and bear it. We brought them on the journey with us, and it took a lot of time and compromise, but most people could see the potential.”

It was potential that took longer than anticipated to reach though, when the main contractor of the project, Mainzeal Construction, went into liquidation in early 2013.

“Everything came grinding to a halt and stayed that way for about two months.”

Ivan says that during that time, maintaining the site was of paramount importance.

“People would just wander through because they knew there was no activity going on; they felt it would be safe, when it really wasn’t.”

LT McGuinness were brought on a few months later as the replacement contractor, and construction kicked off once more.

“The best thing was seeing spaces begin to open up again.

“For months people had learned to go a certain way, and you’d watch people as they realised they could swap back to the old way—it was great to see.”

One of the “finest spaces in the city” 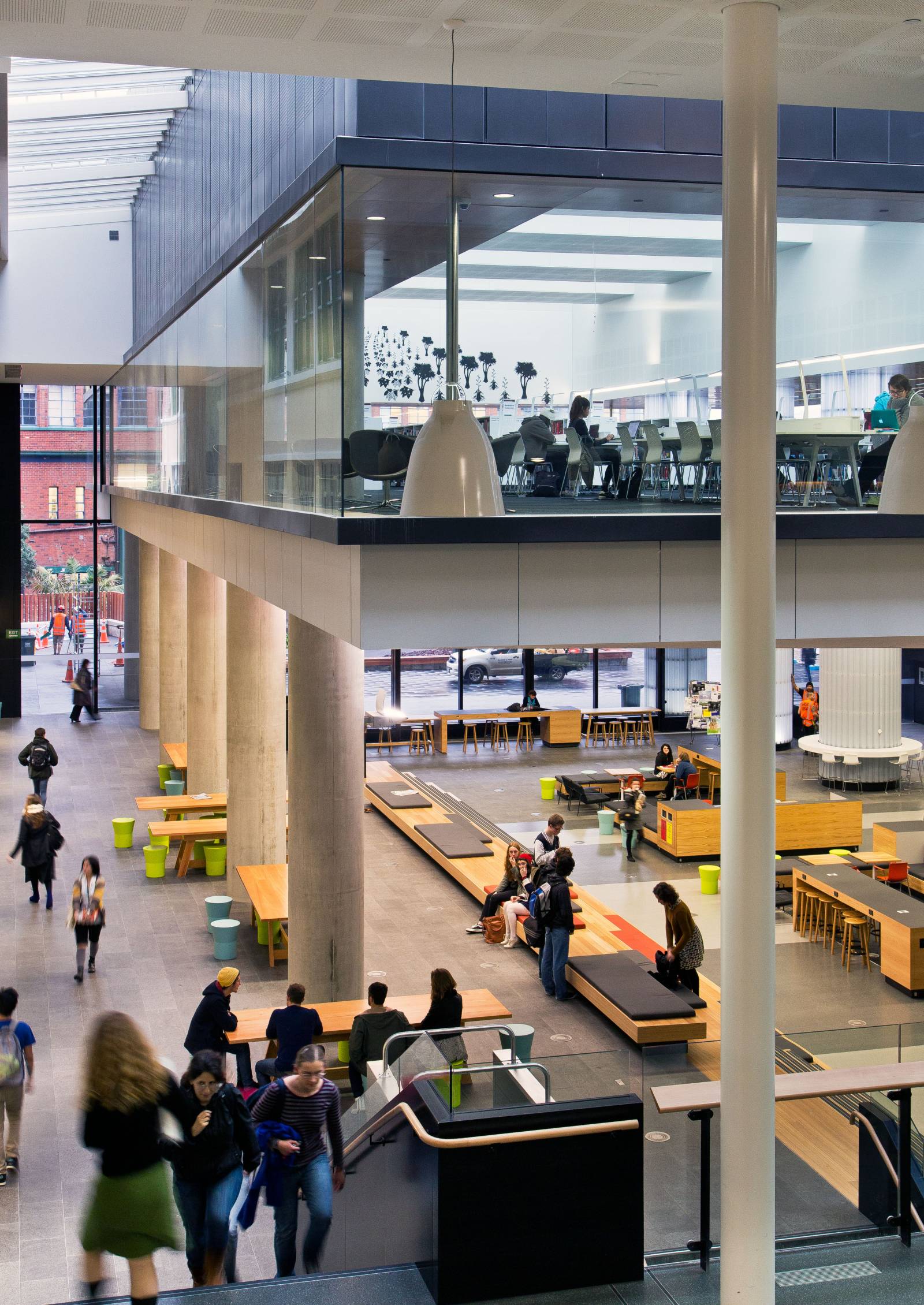 Image: The interior of The Hub.

The build was completed in 2013. The result is a building described by architect Peter Wood in a 2014 edition of ArchitectureNZ as one of the finest spaces in the city.

“The genius of this design is that it is not really a building but a complex—integrating a number of programmatic requirements while masquerading as a single solution.”

It’s a sentiment echoed by Architectural and Building Science graduate Jin Ha, who now works as an assistant project manager at the University.

“It’s really four separate buildings joined together—which, from a building science perspective, is an incredible achievement; how everything connects, and how it all works together.”

Jin was a student while the Hub was under construction and remembers walking through the site as a learning opportunity—to identify both the design challenges and subsequent solutions, especially when considering potential earthquake damage.

“The main problem is those same connection points. Especially with the older brick buildings, there needed to be lots of ‘wriggle room’ between each to be flexible in an earthquake but remain connected.

“By using timber and steel, the Hub bends and flexes around the other buildings. Parts of it are on rollers too, so in an earthquake they’ll slide instead of snap.” 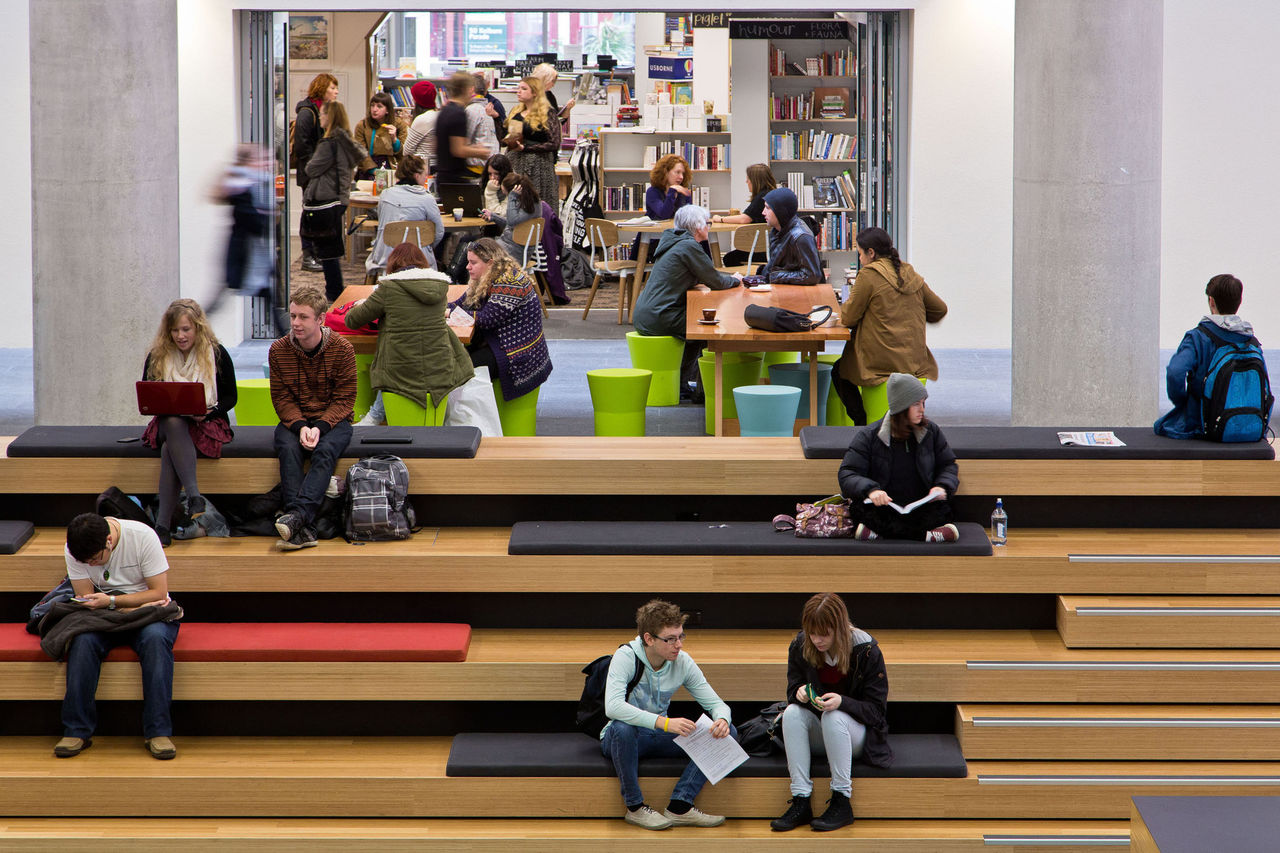 Image: Staff and students using The Hub as an informal meeting space.

“It’s a perfect example of the Greek agora philosophy: a place for people to meet and to shop, and it’s become a real social space for students.

“Recent building science studies show that having this kind of informal breakout space, linking between formal learning spaces, is really key for students’ learning and mental health as well.”

The Hub: a future

Ivan says it’s a space that he believes will stand the test of time—already performing in ways he never predicted.

“There’s no way you could have anticipated COVID-19 back when it was designed and constructed, but it’s perfect for this new way of blending learning.

“And that’s the whole point. Do it once, do it right, do it in full, and it will be there for a long time to come.”

He says the Hub has become fundamental to the University’s identity.

Image: The Hub, with the Tim Beaglehole courtyard in the foreground.

Nicholas Leckie, Canopy over the Quad, Its construction, life and future, Victoria University of Wellington, 2011