Tucked away in the bottom of the library building sits a few little rooms that contain Wai-te-ata Press—Te Whare Tā O Wai-te-ata.

Many students, and even staff, may not know the Press is there. But 2022 marks 60 years of the Press on Te Herenga Waka—Victoria University of Wellington’s Kelburn campus, and it’s been 60 years full of exciting events, exhibits, and achievements.

Wai-te-ata Press was founded in 1962 by Professor Don McKenzie from the then Department of English at Victoria University of Wellington. It initially operated as a research space for honours courses in paleography, bibliography, and textual study from two small garages at number 10 and number 12 Wai-te-ata Road.

When Professor McKenzie moved to Oxford in 1986, some of the equipment was maintained by the Department of Library and Information Studies as part of their Printing Laboratory established in December 1981 by Professor Roderick Cave. This Printing Laboratory first lived in a garage on Kelburn Parade, and later the basement of the School of Music on Kelburn Parade, but Professor Cave’s departure for Singapore in 1993 saw the Laboratory closed entirely. Some courses on printing were still taught at the University by printer and publisher, Bill Wieben.

Wai-te-ata Press was officially re-established in 1995, living in the building that now houses the Malaghan Institute of Medical Research. There it lived until 2008, when a home was made for the Press in the bottom of the Library on Kelburn campus. This move was celebrated with a launch led by Professor Michael F Suarez, one of Professor McKenzie’s Oxford students, now Director of the world-famous Rare Book School at the University of Virginia.

Over the years, Wai-te-ata Press has acquired one of the largest collections of historic letterpress printing presses and other printing paraphernalia in the southern hemisphere. The collection of equipment at the Press includes a substantial amount of lead and wooden type, representing most of the type families and including over 115 wooden typefaces. The Press also holds a range of historic printing presses, all of which are still in use today. The collection also includes some rarities/oddities, including a set of hand-cut wooden letters one foot high purportedly used to print advertisements for display on the sides of Wellington’s tramcars, and a Victorian rule-bending machine.

The jewel of their collection is the Stanhope No.108 printing press, which was built in 1813. The press is on long-term loan from Cambridge University. 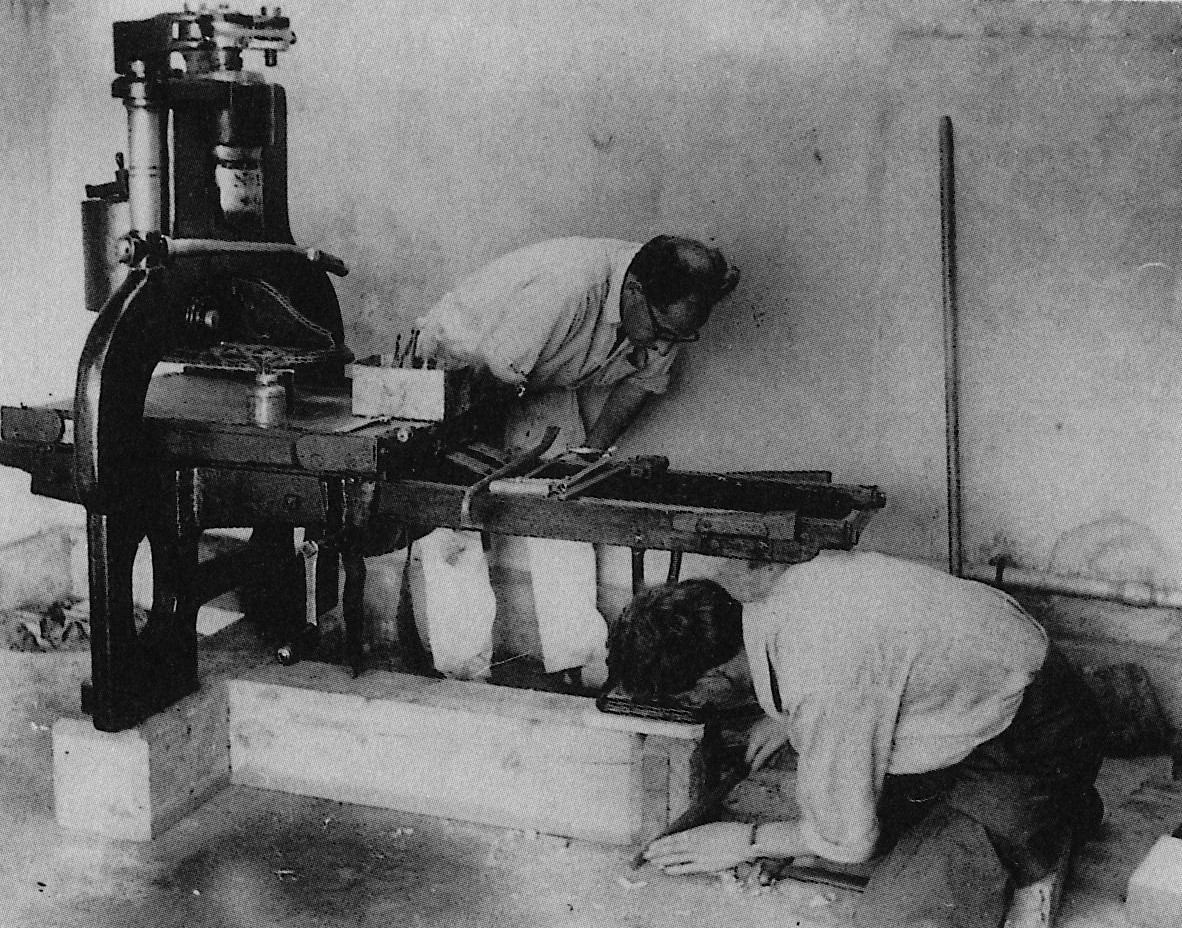 Image: Installing and printing on the Stanhope no. 108 printing press, circa 1962. Left to right: the late Emeritus Professor Don McKenzie and the late Professor Harold William Orsman.

Designed by the third Earl Stanhope as the first cast iron press in the printing profession, this particular press (number 108) dates from 1813 and is assumed to be the last press fabricated by Stanhope’s engineer, Robert Walker of Vine Street, Piccadilly. It is one of only 16 such presses left in the world. It is also the oldest printing press in New Zealand, pre-dating those imported by the French and English in the colonial period by some twenty years.

All the printing presses are still used to create publications today, and the Press also uses modern techniques including digital and 3D printing. During the 1960s and 70s, Wai-te-ata Press was a key contributor to the development and recognition of New Zealand literature. It made contemporary writing readily available to students and the public at a price and format accessible to the reading/buying public. This was during a time in which printed works of writers were difficult if not impossible to publish, sell or buy in NZ bookshops, let alone overseas. Significant writers printed and published by Wai-te-ata Press during this period include Alistair Campbell, James K Baxter, Peter Bland, Charles Brasch, Charles Doyle, Sam Hunt, Iain Lonie, and Bill Manhire. Under the initiative of Douglas Lilburn, Wai-te-ata Press established a music division in 1967 to print and distribute scores by New Zealand composers. This Press now exists as Wai-te-ata Music Press, and still publishes music today.

The Press also commissions translation work, including Chinese, Italian, Samoan, Persian, and French editions of the Best New Zealand Poems, and a Māori translation of Bill Manhire’s poem Erebus, written to mark the 25th anniversary of the Erebus disaster. The Press has collaborated with students, dignitaries, academics, cultural representatives, and the public to engage in conversation, celebrate new endeavours, and send new translations out into the world. Such events have included the NZ launch of the Italian translation of Patricia Grace’s Potiki along with a celebration of her 80th birthday. More recently, the 100th anniversary of the publication of James Joyce’s Ulysses was heralded with an exhibition, public talks, handprinted keepsakes, and a major collaborative research project on evolutionary translation. 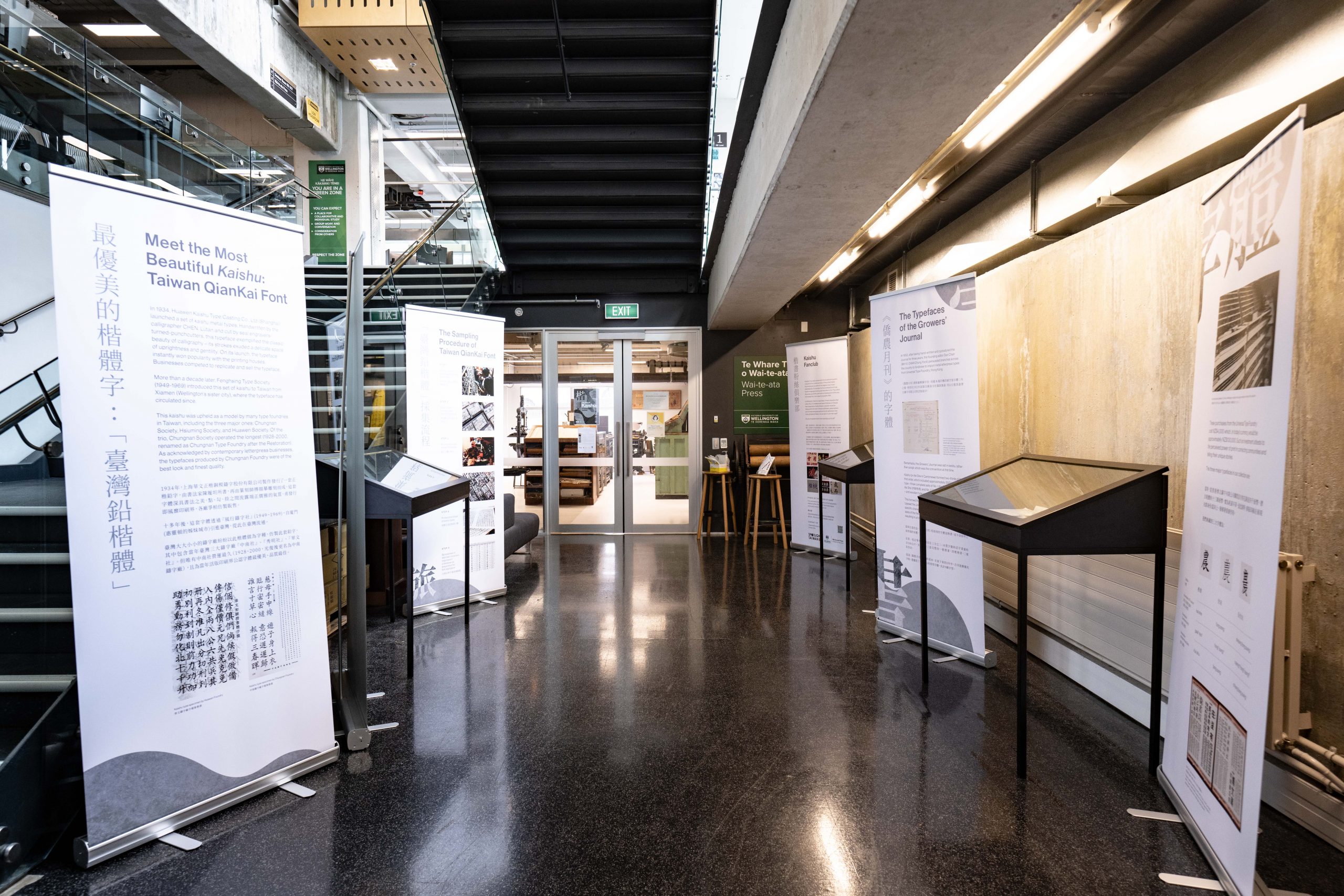 Image: ‘The Voice of Kaishu: A typographic journey’ display.

Wai-te-ata Press also runs other events with a strong focus on engaging with the community. Throughout 2022, the Press hosted a series of type-cleaning workshops for their Chinese heritage type collection. This collection, originally used to print The Grower’s Journal, was rediscovered in a farm shed in the North Island. As a result, the type needs to be carefully cleaned and stored in new cases. These sessions enable the community to connect with the type faces and, for Chinese New Zealanders, to connect with their language and identity. During National Poetry Week 2022, the Press also hosted several workshops teaching students and visitors to use these types to create and print poetry. A major exhibition and public engagement programme sponsored by the Taiwanese Ministry of Culture showcased the history of the kaishu type collection and its shared history with Taiwan. This continues a tradition of exhibitions at the Press that feature their extensive collection and allow the community to connect with the history of printing, translation, and the local arts community.

The Press is also a teaching and research space. Over the years, they have offered workshops open to anyone wanting to learn how to set type, print using the letterpress technique, and bind hand-printed books. They also host undergraduate and postgraduate courses for students across a huge range of disciplines, and these courses have led to a number of innovative exhibitions, including a 2013 exhibition by Information Management students where they synthesized their prior bibliographic research about a pre-twentieth-century book and published a narrative about its production, distribution, reception, and preservation using the website building tool Weebly. Research projects run by the Press have included the Marsden-funded Printers’ Web project, which examined the global communication networks of printers and their typographical journals in the nineteenth century and most recently a Science for Technological Innovation project using computational techniques and digital humanities approaches to find missing shareholders of a Taranaki-based Māori Incorporation.

The Press also hosts residencies, including the recently announced Dan and Una Chan & Laywood and Joyce Chan Residency. This Residency at Wai-te-ata Press will, from 2024, focus on projects that enhance understandings of and engagement with Chinese Aotearoa, whether historical, social, cultural, literary or, more broadly, the fabrics of life such as gardens, buildings, foodways, and more. This endowment honours the legacy of Dan Chan, the founding editor of The Growers Journal for the Dominion Federation of NZ Chinese Commercial Growers.

Next year will also see the launch of the Ruth and Oswald L Kraus Innovator-in-Residence programme. Oz and Ruth Kraus established Brick Row Publishing in 1979 and were noted for publishing the first children’s book in te reo Māori and English in New Zealand, as well as the longstanding series Poetry New Zealand. Their interest in fostering young writers and disseminating their work continues with this Innovator-in-Residence Programme. During the residency, an eligible student will work alongside Wai-te-ata Press to explore the interface between creative writing and publishing in innovative formats using the letterpress, 3D printing, and digital facilities of the Press.

“Wai-te-ata Press is a unique, multidimensional, interdisciplinary space, exemplifying the strong presence of the humanities at Te Herenga Waka and its commitment to creative research, teaching, and practice,” says Dr Sydney Shep, Reader in Book History, The Printer at Wai-te-ata Press. “We look forward to seeing our new Residents and our community continue to contribute to the next 60 years of Wai-te-ata Press.”